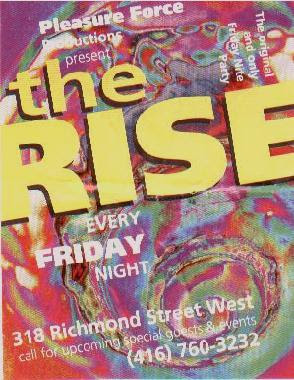 It all happened this week. Or should I say not happen? P. called the Exodus line a few days ago and the operator said the line was no longer in use. He called the Chemistry hot line and all we heard was Alx of London saying they would leave it to the newcomers and he would remain as consultant. Is this the end of an era and perhaps the beginning of a new one?
Went to Love last Saturday, all the omens were there: The entire sound system of the House room had been detained at the American/ Canadian border. As a result, no house music until 3 a.m. Met H., he began to look tiresome with the same old boyish demeanor. Plus it did not go well with his tall physique. He could have carried himself better. Even though he seemed to know quite a number of people, he always seemed to dance by himself. Same with Mishl. She is another frequent party-goer who knows many people but still seems very much alone.
Went to Nitrous' new set-up, Atlantis this weekend at the Science Centre. Tickets were selling fast. W e could only get the last 3 at Play de Record which we had to pay more. It was fun. Lots of people walking around trying out the games and tricks but the dancing was not that great. More power to the young girl who wore a transparent dress with no undergarment. This kind of event is for the fun of it rather than for the music. Gone is the dark, mystery and the slight possibility of danger that makes parties at night attractive & repulsive. What's left is the healthy, happy, childlike atmosphere of the Science Centre.
318 Richmond has become the home of Pleasure Force. The organizers seem alright with a door policy that welcome only the genuine reveler.