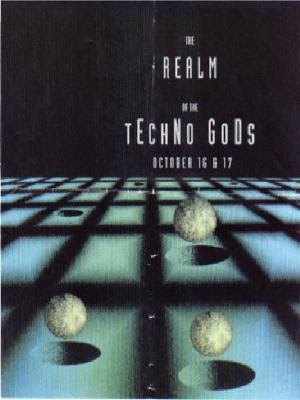 Hanna after midnight was one cool street. It was like a gothic dream - dark, vaguely evil, a row of windows with broken glass almost closed off by overgrown weeds. A derelict forgotten and found. It was an abandoned warehouse with a long and wide space inside. A stage was set at the far end where the light source was. Someone's dog ran rampant. When it ran, colorful lights deflected from its body. Then Joey Beltram played. We stood in awe. All of a sudden the theme on the flyer made a lot of sense, it was the Realm of the Techno Gods. DJs & techno groups from New York, U.K. , Montreal and Toronto were there. It was a magical wasteland - people drifted about - heavy metals, long hair, t-shirt type, skin-heads in sports wear (sleeveless Tee with a big number at the chest), a topless punk girl. Silhouette of different tribes dancing to the rhythm of the techno beat. Rave as a pagan ritual . A religious experience. Death & the underworld. Fund raising for the A.I.D.S. Committee.