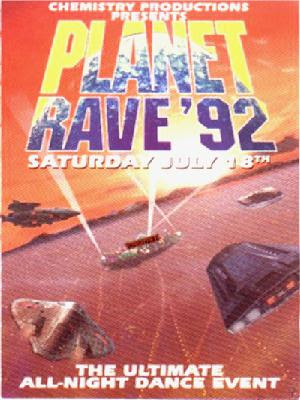 The first outdoor rave in the history of Canada, Planet Rave 92 took place near Brampton on Derry Road. The original Centennial Park location had to be changed due to authorities interruption. What the hack! We had a wicked, wicked time despite the mud caused by the rain the night before. It was the most exciting thing ever happened. P. & I asked Mrk & his girlfriend to come with us since they had a car and could take us there. In the depth of the night, we could see all these cars going in the same direction as we were. We all shared that feeling of knowing that something wildly enchanting was about to take place at a location that only a privileged few, maybe a thousand, knew. Up above, the half-moon gave us its blessing. We parked our car along a narrow path with trees along one side and a wide, open field on the other. People arrived in an orderly manner. Once people got off their cars, they all checked everyone out as if trying to recognize the face of those in the know. One can tell how excited we were, everyone either walked really fast or ran towards the lights and the crowd. There was a grin on everyone's face as if something unprecedented was about to unfold.
It was like a carnival, a bazaar. There were stalls and booths selling all sorts of goodies like glow sticks, candies, smart drinks. There were food for the body like hot dogs and food for the mind: electroenergetic brain stimulator that was supposed to enhance your concentration, relaxation, clarity of thoughts and depth of sleep (according to the staff working at that booth). A.D. was there.
Behind the booths, a stage was set and a live band was playing. There was laser beams, video graphics and a thousand mostly white youngsters jumping in the mud. It was splendid. As we walked away from the crowd, we could feel a cool, calm breeze gently brushing the leaves in the trees. There was a stream at the side of the dancing crowd. And a veil of mist drifting around the row of trees at the far end of the other side of the stage acting as the backdrop for the laser beams. It was magical, like a fairy tale come true, dawning of a new era, technology reflected on nature. Even as I am writing this, I can still smell the fresh air, hear the techno beat and see the laser beaming on through eternity.
There were benches perfect in size, just right for the weary-from-dancing-for-hours. We were so flattered when the Exodus crew handed us their flyers for their party three times. They were a humorous lot. We received enough flyers to have parties lined up till the end of the month.